A few words about us…

Get to know our space and its peculiarities.

After eight years of Stella Sandaltzopoulos’ personal work and care, in the spring of 2009 mansion Tsaliki opened its doors. The old villa was completely renovated and transformed into a beautiful boutique hotel with five unique independent suites, a garden and terraces set against the incredible backdrop of the endless blue of the Aegean and the Castle.

Its beautiful and discreet corners offer warmth and coziness. Following the traditions of the island and those of the building’s history, the hotel is ready to accommodate all those who seek relaxation and enjoyment throughout the year, in a historical townhouse which meets modern accommodation requirements.

The vivid colours, made with aged lime and natural pigments – part of a long tradition – is what makes each suite so unique.

Peculiarities of another era …

Carefully chosen old furniture and objects coexist harmoniously with special fabrics that enhance the ambiance together with the architecture. All these elements combine to bring about a unique experience.

Breakfast is served in the hotel garden. The silverware from the old cruisers and the crisp white tablecloths are the setting for a breakfast that includes homemade jams, cheeses of the island, fresh vegetables and juices, homemade cakes, pies, pastries and more. The menu changes daily and offers an opportunity to taste the flavours of Leros.

You will find the hostesses Ivana and Stella more than ready to make you feel at home and to assist in your comfort all year round. 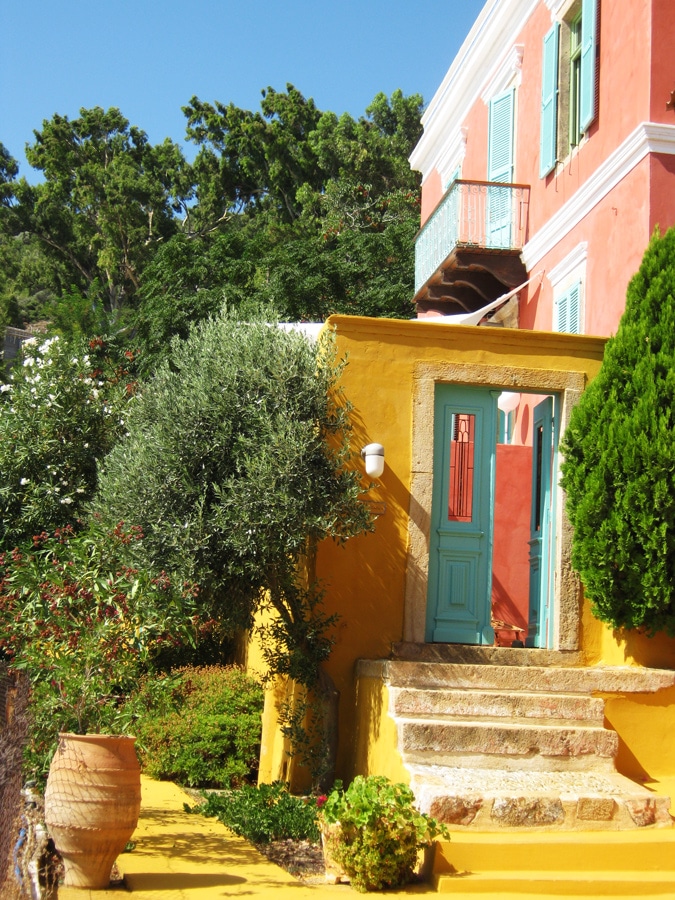 History of the hotel

La Casa Di Colori is housed in the mansion of the Tsaliki family, which is situated in the traditional village of Platanos, overlooking the Castle of the island and the Aegean sea. Emmanuel Tsalikis was born in turkish-occupied Leros in 1835. As many other locals, he followed the migration stream to Egypt, where together with a cousin, he became engaged in the cotton trade. Thanks to his diligence and ingenuity he acquired great wealth. During the Mahdist Revolt against the Anglo Egyptian administration, Emmanuel Tsalikis was found to be feeding the English army in Sudan. The British offered him a noble title for his services, but he denied any privileges saying: “I am Greek and I prefer to remain Greek.” Four of the five children he had with his wife Maria Theologou grew and studied in Europe.

Their love for their country urged them to return and their economic prosperity allowed them to build the mansion in 1907 on one of the most beautiful parts of the island. Influenced by the neoclassical architecture of Alexandria, they constructed a two-storey house in that style. Many Lerians remember the Tsaliki family coming to the island. Their arrival was quite an event for the small society of the place. Every year the same ritual; hundreds of trunks – some of which are still in the hotel – full of fabrics, spices and precious objects that were unseen in Leros at the time, were transported from the port to the house. The Tsaliki family was also known for its majestic celebrations that took place in the mansion.

In 1912 Leros was occupied by the Italians, the house was rented by the italian army and was used as a pantry. The rental agreement is on display at the Folklore Museum of Leros (it is referred to as Storage Facility # 9 of 12 such facilities of the Italian army). Later, during World War II and the German invasion of the island, the house was seriously damaged, while after the release of the Dodecanese islands in 1945, it returned to the ownership of the Tsaliki family.

In 2009 the mansion reopened its doors, now as a boutique hotel. The restoration and maintenance took several years, in order to preserve one of the island’s historic homes, reminding us of the passion of the people of the time, their elegance, their knowledge, but most of all the respect they held for the environment. The Tsaliki mansion was classified as a monument by the Ministry of Culture. In its written declaration, the Ministry states: “The Tsaliki mansion is a typical example of a Dodecanese mansion, important for the study of the evolution of architecture in the region. It combines the morphological and architectural features of the neoclassical style with the simple lines of Aegean architecture and is connected with the memories of local residents”. 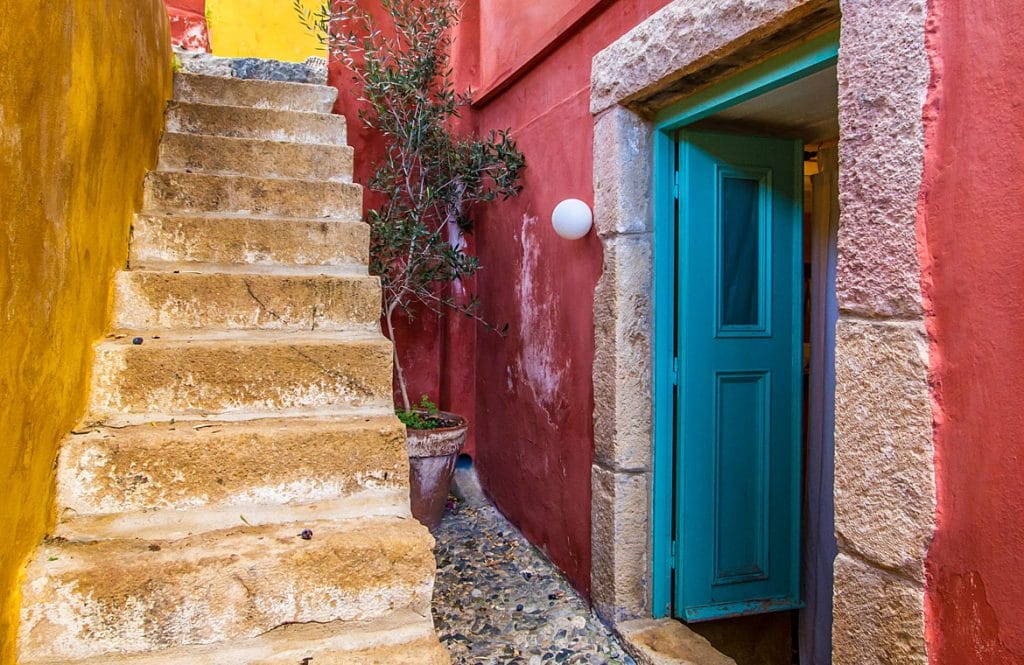 The garden of La Casa Di Colori is a place that you will love from the first moment you set eyes on it. It is a small paradise, eager to learn your secrets but will never give them away.

Its wonderful corners provide relaxation, sunbathing, and rest, surrounded by a sunny sky and the Aegean sea. In the morning, you may take a book and come to the garden, for the coolness of its breezes. In the afternoon, do not miss the unique colours of the sunset, relaxing with a glass of wine or aperitif. In the evening enjoy the garden’s romantic atmosphere, in the light of candles and the sounds of nostalgic music.

Our hotel garden will grant you unforgettable moments.

Breakfast is served in the hotel garden.

The silverware from the old cruisers and the crisp white tablecloths are the setting for a breakfast that includes homemade jams, cheeses of the island, fresh vegetables and juices, homemade cakes, pies, pastries and more.

The menu changes daily and offers an opportunity to taste the flavours of Leros.

Call us for availability

Contact via email at lacasadicilori@gmail.com or call us on (+30) 2247 023341.
Alternatively, visit the contact page and fill out the form.